ANO is in the lead again

If parliamentary elections were held now, seven parties would enter the Chamber of Deputies: ANO (21,5 %), CSSD (Social Democrats – 18,9 %), KSCM (Communists – 16,0 %), TOP 09 (7,8 %), ODS (6,8 %), KDU-CSL (Christian Democrats – 6,3 %) and Úsvit – Národní koalice (Dawn - National Coalition – 5,0 %). CSSD lost nearly 2 per cent points since last poll in August while ANO is doing as well as that time. Support of Dawn increased substantially in last month as well as votes for Okamura’s Party Svoboda a Přímá Demokracie (Freedom and Direct Democracy); this increase is likely due to migrant crisis. The current government coalition (CSSD+ANO+KDU-CSL) would gain a constitutional majority. Almost a fifth of the votes would be obtained by entities that would not exceed the threshold of the Chamber.
At the end of March, elections would be attended by 48 % of eligible voters. Willingness to go to vote is, since elections in 2013 (which were attended by 59.5% of eligible voters), consistently lower, still moves around half of eligible voters.

Personal interviews took place since September, 17, to 28, 2015, on a representative sample of 1020 Czech citizens aged 18+, selected by quota sampling. 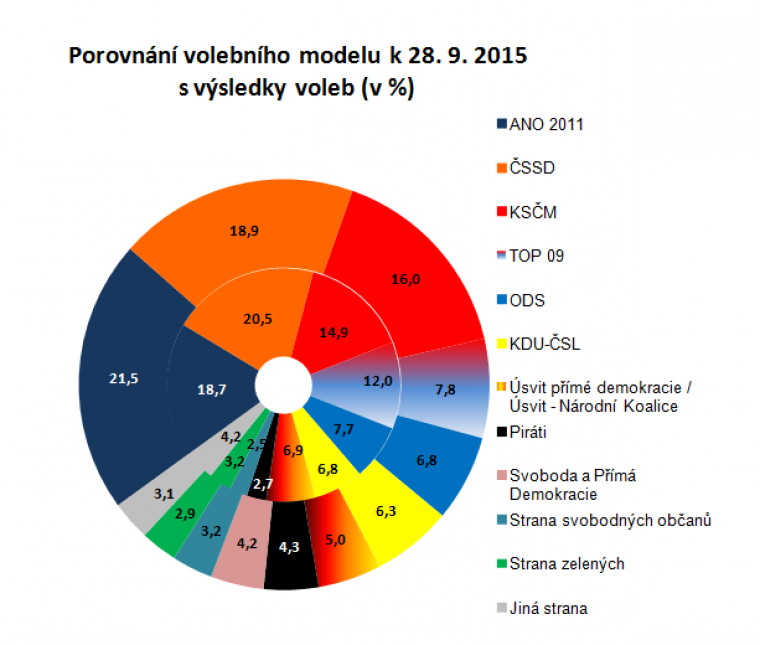