All around the English speaking world people usually answer the question “How are you?“ with simple „Fine, thank you“ regardless their real condition. But the Czech are different…

They clearly take this question as an opportunity to complain about weather, health or financial situation.

What are the Czech families really able to afford?

Economic situation for part of the Czech population is not bright: every 20th Czech is unable to earn enough money for paying current expenses and so is in debts repeatedly.

Nearly four out of ten Czechs are able to pay current expenses but they have a little or nothing left for fun.

Only 56 % of the Czechs can afford to pay for their hobbies.

When it comes to broken fridges or washing machines, it is a disaster for 60 % of the Czechs. They don’t have savings for a new one so they are forced to take out a loan.

One-fifth of the Czechs experience a relative prosperity when they can afford holidays abroad without difficulty.

And only 7 out of a hundred Czechs can buy a new car from their savings.

1 out of a hundred Czechs can afford a new property without mortgage or other loan. Even so, it represents 90,000 people from the whole Czech population.

People living in Prague are not better off than others

Our parents used to tell us that we have to learn as much as possible so that we will do well in life. And as a recent survey showed it was all true! Another “general” truth says that those who live in Prague are better off and people living in the countryside are poor. Our survey did not clearly confirm it.

At the beginning of this year, ppm factum research company carried out a representative research with 997 respondents aged 15-85 from the whole of the Czech Republic (by personal interviewing) focused on their lifestyle. One of the topics was how people perceive their current financial situation and resources, thus their overall standard of living.

Those who can without hesitation afford new home, house, flat or cottage (i.e. those who have sufficient savings in any form) are a significant minority but it represents ca 90,000 people. Another 15 % of Czechs have savings in amount of tens of thousands CZK therefore can afford holiday abroad.

On the other hand, every fifth Czech can handle current expenses but has nothing left for fun and hobbies and has no bigger financial savings. 4 % of the Czechs even say that they sometimes have to borrow money for their current expenses.

If we divide it into two “better” and “worse” parts (4 orange and 4 grey segments in the following chart), we can see that there are less of those who are doing well financially.

Other information that emerged from the survey is not surprising at all. Men claim twice as often as women that they manage expenses to hundreds of thousands CZK.30 % less men in comparison with women also admitted that can manage just current expenses.

This is true for all ages; men perceive their financial situation more optimistically than women. The question is whether this is due to the fact that women include to their “current” expenses more items than men. And not just things like clothing or accessories (which women provably buy more often than men) but in most households they are responsible for paying bills and buying groceries. Their “current” expenses may differ quite significantly from expenses of the men. 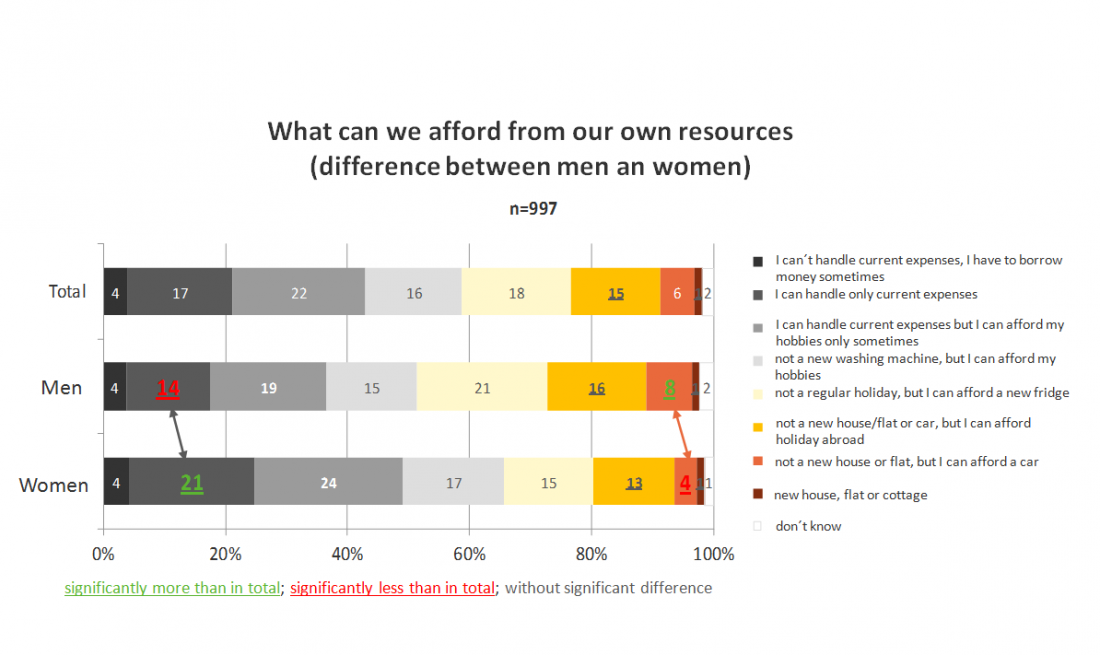 Research clearly confirmed that our parents' advice that if we do not want to worry about money in our life, we have to study, was not odd at all. There are twice more people who work but have only basic education and their income is just enough to cover their current expenses than those who work and have at least secondary education.

The same “trend” occurs among those who are no longer employed - retired people. They receive a pension based on their past earnings. The situation is identical in the fact that those who achieved higher education than elementary are more likely to receive a small pension and are not able to save anything. The difference is not so striking (because of the overall pension level) but it is obvious that this trend is relevant in the long term. 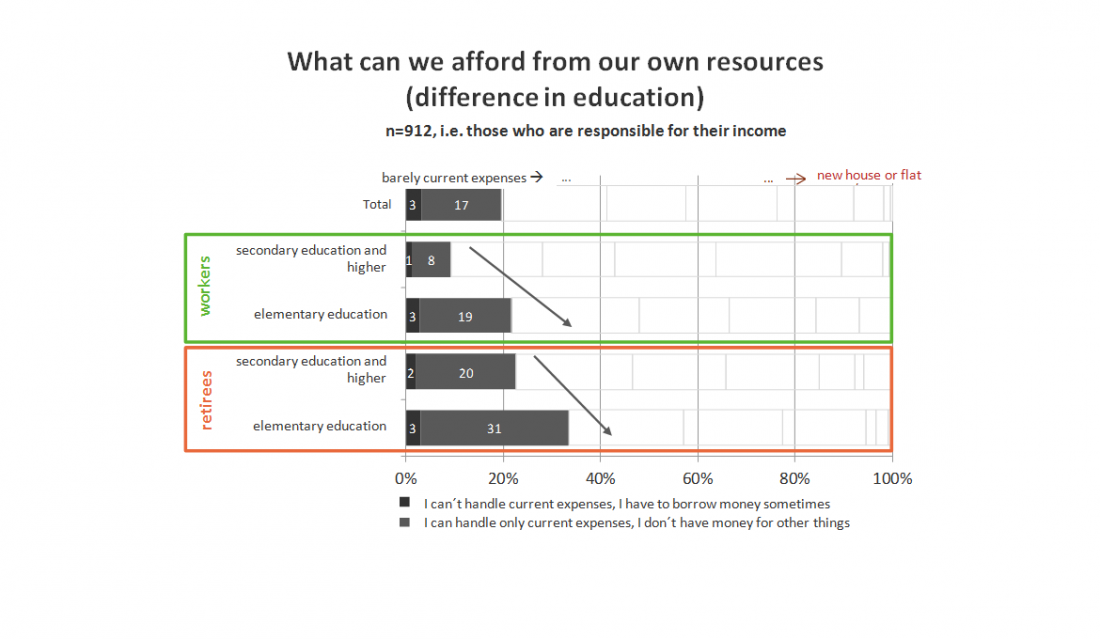 Overall, if a person lives in a couple (with a partner or in marriage), he can handle his financial situation better (at any stage of life) than when he lives alone. Two are better than one.

The chart below shows that the groups of people who assess their situation more positively, i.e. they can afford an extra investment in the hundreds of thousands crowns and more (yellow to orange lines) converge on the right bottom of the circle – i.e. into segments dominated by individuals who are focused more on themselves, on their success and self-fulfillment.

Conversely, those who are in a worse financial situation (grey lines) occur across all segments but also concentrate strongly in the left half of the circle, i.e. to the archetypes which are characterized  by their interest in the common good and welfare of both themselves and especially others. 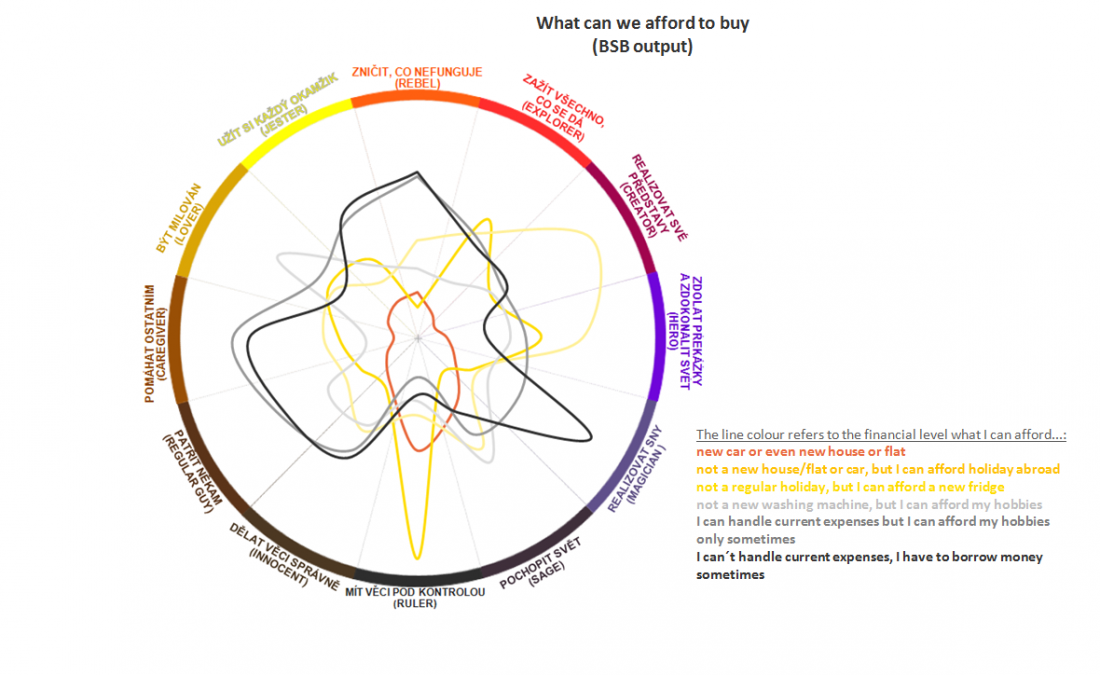